Višnjan is a small town in Istria. The name Višnjan probably derives from the Latin word Vicinianus meaning (near), because in the past Višnjan was the closest possession of Poreč.
There, you will recognize the spirit of the rich historical heritage. Every stone, house, street, corner, they speak about  history.

Inhabitants succeeded to preserve their autochthonous offer, a rich variety of traditional Istrian dishes, quality wines, olive oil and many other traditional and ecological products. Agrotourism is very popular.

You can buy original souvenir made by local craftsmen.

Višnjan is world known for its astronomical achievements.  In Višnjan, there is the famous observatory, which is one of the ten most productive observatories of the world of all times. It is the first in Europe by the number of discovered asteroids.

With this new kind of attractiveness, the astro-tourism, Višnjan region is  known by the number and quality of agro-tourist farms.

The local residents known for their conformity, opened the doors of their homes and offered to visitors real customs and pleasures of the Istrian man.

The view from the hill of the old town you will see the green fields and lush vineyards. Local people, on its red soil vines and olive trees cultivated green fields and feed the rare and powerful autochthonous cattle - Boškarin. 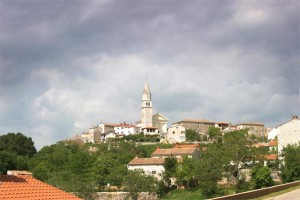 Višnjan is for people who love peace, but not far is town of Poreč. But in Višnjan, there are events as: Astrofest, traditional meeting for astronomy lovers -festival 21.06.-22.06.; Mandalenjina - folk festival; sports competitions and entertainment, 25.07.-26.07.; St.Lovro night - the public perception of Perseids, 12.08.-13.08. 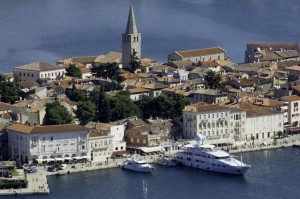 In Višnjan, you will see a lot of monuments. It is a trace of the past. Venetian style Baroque municipal building - from the 17th century, the old square Tićan, Observatory building - the first example of cyber romance; St. Anthony Abbot Church - from the 13th century, the entrance to the old town, with frescoes and Glagolitic inscriptions; Church of All Saints, St. Mary Magdalene - the 16th century; in the cemetery; Cave Baredine- natural geomorphologic monument, beautiful hall decorated with stalagmites, stalactites and underground lakes; Church of St.Kvirik and Julita - from the 19th century; with paintings of Venetian masters from the 17th century....

Countryside house Celine is decorated for your perfect holiday, a runaway from every day, tire and s ...
Inquire now

Villa Mia is situated in Višnjan in Istria. In Villa Mia you will enjoy in true luxury and new philo ...
Inquire now