Montenegro is called Black mountain? This tiny Balkan country with gorgeous beaches and rugged interior has a fascinating history that shaped not just its landscape, people and culture, but also its name. Its inhabitants call it Crna Gora which laterally translates as Black mountain.

There are several stories and legends behind the country’s name.

Some say, it was the sailors who named this region, as the mountains around the Bay of Kotor are towering from the water directly into the dark clouds in the sky. Other believe the name derives from the incredibly dense forests in Montenegro’s inland, especially around Lovćen National Park. These forests are so thick that they look almost black to outside observers.

The international name Montenegro comes from the Venetians, who were in charge of much of the Adriatic coast since the 10th century, including Kotor and Budva.

Mount Lovćen (1749 meters) is not the highest peak in Montenegro, but it is the most famous one. When the Ottoman Turks gained control all over the Balkans, the area around Mt. Lovćen was one of the few places they left out.

Just below the mountain’s peak, on the nearby Jezerski vrh (1657 meters), you can visit the glorious mausoleum of Petar II Petrović-Njegoš, a Prince-Bishop of Montenegro from the 19th century. Njegoš is remembered dearly as a national hero, a poet and philosopher.

Amazing towns in Montenegro: With a history dating back to the 15th century, the islet of Sveti Stefan is not only one of Montenegro’s most stunning and iconic sights, but is also a destination soaked in culture. The island is now home to the luxury holiday resort Aman Sveti Stefan, which has hosted stars from Claudia Schiffer, Marilyn Monroe, kings…

A charming coastal town, Kotor has dramatic sea and mountain scenery for its visitors to marvel at. There’s also a tranquil bay hugged by the limestone cliffs of Lovćen and Orjen. As a UNESCO world heritage site, the region of Kotor promises to provide unforgettable views as well as an enthralling history and culture.

Budya is situated on the Adriatic coastline.  Budva is also home to an ancient old city which has been remarkably well-preserved since the Middle Ages.

Perast, built in the Baroque style during the 17th and 18th centuries, this handsome stone village is the product of 200 years of Venetian rule. Because of this, its infrastructure and architecture emulates that of the historic Italian city.

Situated just at the entrance to the Bay of Kotor, Herceg Novi is a large town popular among yachters and sailors.

Tivat is a resoundingly pretty town at the foot of Mount Vrmac, and is a popular spot for hikers and mountaineers.

Montenegro is one of the smallest countries in Europe but with a rich and varied landscape: beaches, lakes, mountains, caves, to must-see buildings with amazing architecture. Durmitor is a massif located in northwestern Montenegro and is part of the Dinaric Alps. Its highest peak, Bobotov Kuk, reaches 2523 meters. This place is perfect for hikers, the view is amazing and one of the most scenic in Montenegro. The Bay of Kotor, also known as Boka, is the winding bay of the Adriatic Sea in southwestern Montenegro and the region surrounding it. If you fancy hiking and walking in nature, you will surely enjoy visiting Lovćen. This mountain and national park are located in the southwestern part of the country. Jaz Beach is one of the longest beaches in the Budva area, the water is clear. Crno Jezero or Black Lake is located in the Municipality of Žabljak in northern Montenegro. Lipa Cave is a karst cave and one of the largest cave monuments in Montenegro. 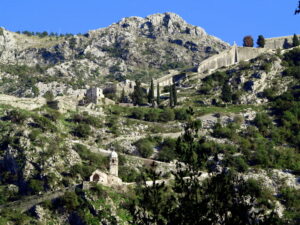 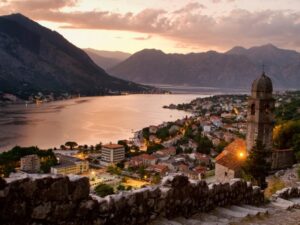 Montenegro has a rich history. This tiny Balkan country with gorgeous beaches and rugged interior has a fascinating history that shaped not just its landscape, people and culture, but also its name. Its inhabitants call it Crna Gora which laterally translates as Black mountain. 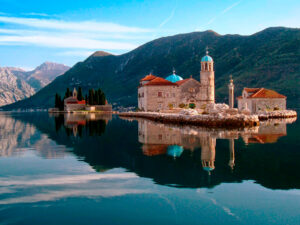 Unfortunately there are no self-catering offers at this location at the moment.

Cut into a cliff, this spectacular Montenegro monastery near Niksic has centuries of fascinating his ...
Inquire now