Villa Tripalo is a Secessionist building dating back to the 1920 s, situated in a quiet corner less than 100 metres from the main square (Pijaca) in Sinj, occupying a site covering more than 4000 m2.The villa is a memorial to the croatian politician Ante Miko Tripalo, the leader of the “Croatian Spring” movement, whose bust stands on the entrance.
Villa Tripalo is a protected cultural monument.

The spacious park is walled, and the entrance to the house is on the north side, through the gateway fitted with original, wrought iron gates. The roof has been restored to its original condition and the facade renewed according to the original, in terms of both the colour and quality of the plaster used, and the decorations.The each porch has a typical double-winged staircase and two balconies with decorative concrete balustrades. These balustrades and the glazed veranda give the villa its country house character.The interior has been decorated throughout with geometric patterns and the motifs from the plant world, which were rediscovered during restoration work, and implemented in order to reconstruct the original appearance of the rooms as far as possible.

Villa Tripalo is characterised by period woodwork, particularly the external and internal door- frames, with brass features, decorative carvings and panels in the Secessionist style.The wrought iron features of the house are also all original, including the outer gates and basement window grilles.The villa has been furnished with period pieces and top quality Baroque and Empire style furniture, finished with carefully chosen textiles. The final touch is given by the carefully selected period tableware and light fixtures.

Villa Tripalo is a two -storey building consisting of a basement and raised ground floor. Each floor covers 175m2. The original aspect of the house meant it was built around a central corridor running from east to west, linking the porch on the east side with the glazed veranda on the west side. There are three well-appointed rooms to the north and south of the corridor.

Today, each has its own dressing-room and bathroom. The living area occupies the most favourable, southwest section of the house. Distinguished visitors to this  Secessionist  villa can enjoy the additional benefits of modern times such as air- conditioning in all rooms, satellite TV in the salon and bedrooms, a home cinema, coffee machines and other equipment and technical specifications.The kitchen and study are fully equipped. The sauna, gym, massage room and billiard room are located in the basement, along with the all-important wine cellar, which occupies what used to be a secret room in the cellar. There is a restored decorative arbour in the north section, once used to house small animals, while the original single-storey outbuilding, formerly used  to store garden tools, has been transformed into a comfortable guest house and swimming pool, with all modern conveniences. 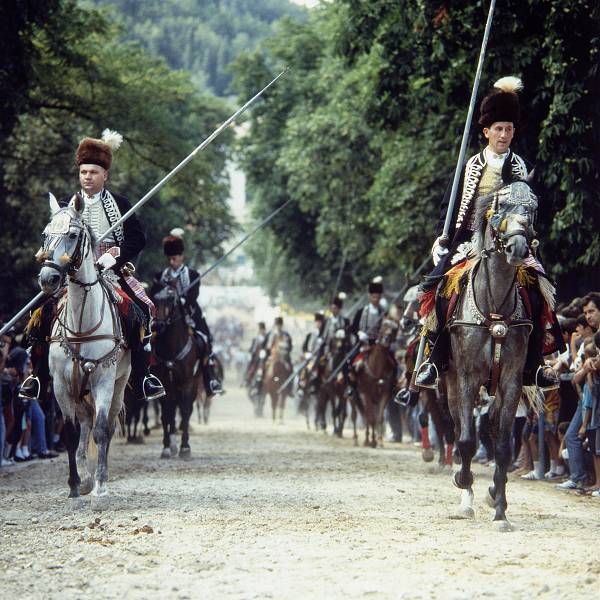 In the northwest corner of this green sea, in the shadow of Mt. Visoka and at the foot of an old fort, lies the town of Sinj, an attractive verdant setting difficult to imagine as the site of fierce combat and great suffering.

Sinj is located 34 kilometres from Split. It is a patchwork quilt of fields and pastures, stitched together with rows of willows and poplars.

Every year, on the first Sunday in August, a tilting competition takes place here, brilliantly costumed knights (alkari) competing according to tourney rules preserved over the centuries. This tilting ceremonies last for a three days. On the first day the “Alkari” (tilters) complete for “Bara” and on the second for “Coja”, which is the pre-qualification stage for the main competition. “Vojvoda” (the Duke) puts three meter long “Coja” (red homespun) on the winners lance point.

The competitors in knightly postures on galloping horses aim the ring target called “Alka” with their lances. “Alka” consists of two concentric iron rings linked by three bars dividing the space between the rings into three equal parts. A hit into the smallest central part (“u sridu”) gives three points, the top part two and the bottom parts one point each. The winner is the competitor that has collected the maximum number og points. Vojvoda ties a threecoloured flag called “plamenac” to the winner called “Slavodobitnik” and gives orders for the Alkar`s name to be recorded in golden letters in the Chronicle of Chivalrous Alkar (Tilting ) Club.

The Alka tournament presents symbol of victory of the people of Sinj and the Cetina district from Turkish attacking.

Proud and jewel of Sinj and Cetina district is Miracle Painting of Bless Virgin Mary of Mercy. This portrait is one of the most beautiful painting in Christian art. There are many Mary royal towns in catholic world. Numerous pilgrims come to receive Marija´s mercy. 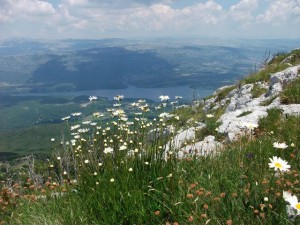 The mountain of Svilaja extends over the area of about 30 kilometres, from Sinjsko Polje Valley to Drniško Polje Valley near the town of Drniš. At an elevation of 1509 metres, the summit of Svilaja dominates this part of the Dalmatian hinterland. For eight years Sinj has hosted the National Fair of Prosciutto Ham and Dry-Cured Meat Products with International Participation which has been held annually in April.

Every year, on the first Sunday in August, a tilting competition takes place here, brilliantly costumed knights (alkari) competing according to tourney rules preserved over the centuries.

One of the most scenic and memorable symbols of Sinj, located in the very town centre, opposite the Church of the Miraculous Madonna of Sinj. Kamičak is a star-shaped fort, built in 1712 on the hill of the same name.